The process of evaluation of the relevant topics was conducted by means of an analysis of materiality made internally by the top management which made it possible to identify the most significant aspects related to economic, social and environmental issues for the El.En. Group and for its stakeholders: these topics, in fact, reflect the main impact generated by the Group and by their activities and represent the aspects which potentially could be able to influence the evaluations made by their stakeholders.

Again during 2020, as we had done in preceding years, the materiality matrix was updated by conducting stakeholder engagement activities.

In particular, we submitted a questionnaire to a sample of employees of the Group and a sample of suppliers of the Group in which we asked them to attribute an order of priority on the issues which they believed to be most significant.

The results which were obtained were integrated with an internal qualitative evaluation of the Group which also considered factors of best practice in the sector and the evolution of the regulations which resulted in the up-dating of the evaluation of all of the issues, as shown in the following matrix: 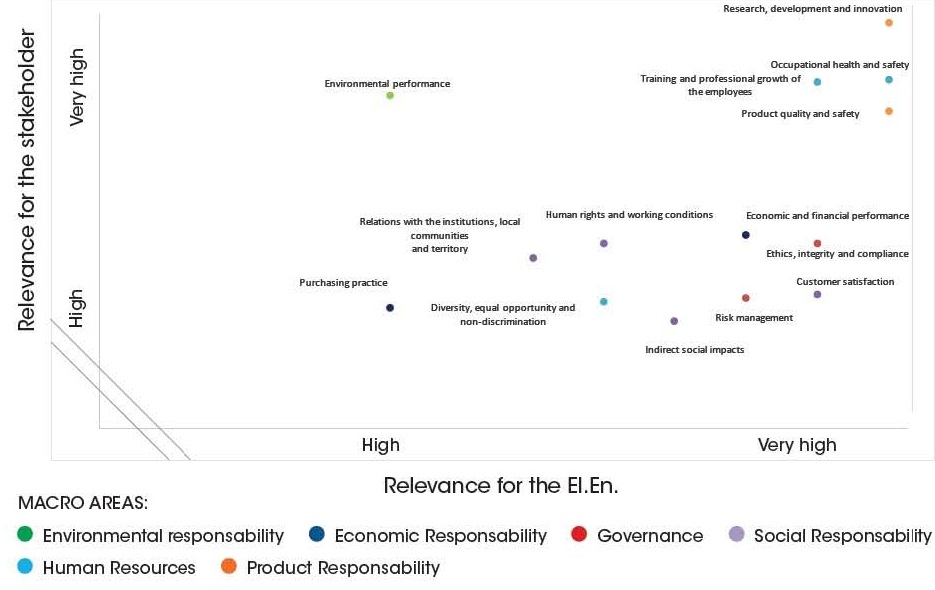 The analysis confirmed the 14 material topics which had emerged last year. In particular we noted that the stakeholders gave more importance to topics dealing with “Research, development and innovation”, “Growth and training of employees”, “Environmental performance” and “Relations with the institutions, local communities and the territory”.

As was done last year the materiality matrix was submitted to the attention of the Commission for Risks and Controls which checked the methods used for evaluating it and approved it.